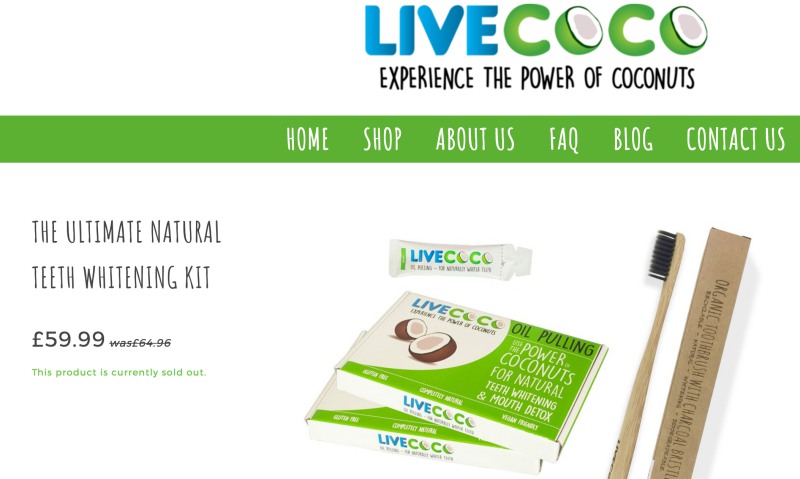 A person’s smile is one of the first things that set them apart. No matter what you’re wearing, whether or not you have brushed your hair in several days (oops), a good smile will save the day.

I’ve gone through several boxes of Crest Whitestrips and they’re getting a little old. I despise sitting through half-hour or heaven forbid, full hour sessions with these strips plastered to my teeth. There must be another way. Is Oil-pulling the new best thing?

Depending on what you want to buy from the site, dealslands.co.uk offers several to choose from, ranging from 10-34% off.

The Kit comes with enough packets for a 2-week course.

What Are The Claims?

Live Coco promises that using the oil will result in healthier gums, less plaque build-up, a cleaner mouth, minty fresh breath, and white teeth. The also claim you will see results after just 1 use.

The products are all natural, alcohol free, gluten free, and vegan-friendly.

The oil pulling kit include small packets that contain mint-flavored coconut oil. These packets look a little like tubes of Go-Gurt (do you guys remember Go-Gurt? I miss it). Tear open a packet and suck all of the oil out. Swish around your mouth for 5-15 minutes and then spit it out. Live Coco recommends using one tube per day.

According to the company, there are no known health risks with using the oil. Assuming, that is, that you don’t have any allergies to coconut oil or mint flavorings. It is safe to use even while pregnant or breastfeeding. Live Coco also promises that the oil is safe to use for children, as long as they know not to swallow the product.

Despite being touted as completely safe, there are those with some concerns about children using the oil-pulling method. Apparently if you swallow the oil and it goes down the wrong tube, it can result in something called lipoid pneumonia (a type of pneumonia that happens when lipids come into the bronchial tree).

Activated charcoal has been used for quite some time to whiten teeth naturally. Though charcoal is natural and generally safe to use, there are some possible side effects. Some dentists believe that using charcoal on the teeth can strip down the enamel and deteriorate the teeth over time. The charcoal powder, though fine, is abrasive when used to brush your teeth. Michigan dentist Dr. Susan Maples worries about the safety of this method as well. Since our teeth do not heal or regenerate, any damage or erosion we cause will be there to stay. That isn’t all however. This enamel breakdown can actually lead to even more discoloration of your teeth. So a method that should be whitening your teeth can actually do the opposite over time. Loss of enamel will cause more tooth sensitivity, which can lead to discoloration (Fox News).

If you’re worried that swishing around the coconut oil will somehow loosen your fillings, fear not. The Coconut Research Center promises that coconut oil cannot possibly do this. If any fillings do come loose, it has nothing to do with the oil and is probably a result of an infection in your tooth.

You surely know someone who has tried to lecture you on the benefits of oil pulling. This trend has been around for a few years now and has earned some die-hard followers. Oil pulling stems from Ayurvedic medicine that actually hasn’t changed much today. This practice was brought from India by a Dr. F. Karach in the early 90’s. It involves swishing an oil around in your mouth for about 20 minutes and should supposedly improve overall oral health. An added benefit is the ability of the oil to (hopefully) also whiten your teeth.

Coconut oil, though the most popular choice for this practice, is not the only kind people use. You can also use sesame or sunflower oil, but the general consensus is that coconut oil is the best choice.

What Are The Benefits?

One of the beliefs is that coconut oil will be able to fight or prevent infections in the mouth. Though it may not seem like a big deal, an infection in the mouth can actually enter your bloodstream and affect your overall health. Coconut oil is anti-viral, antibacterial, and anti-fungal. It also contains something called lauric acid, which can create an unlivable environment for viruses.

Oil can cut through any plaque build-up on your teeth without being harsh on your gums or teeth.

An article on the Dr. Axe website outlines some more potential benefits from coconut oil. These include combatting bad breath, preventing cavities, reducing inflammation, preventing heart disease, soothe bleeding or irritated gums, making your jaw and gums stronger, soothing a dry throat, and, what we all really want to hear, whitening the teeth.

We would hope that since this has become such a popular practice that there would be far more studies proving or disproving the benefits. Unfortunately, there seems to be less than a dozen actual studies on the act of oil-pulling.

An article was published in the Journal of Ayurveda and Integrative Medicine that claimed oil pulling was among the most effective oral health solutions. Scientists have found that using the oil can prevent tooth loss and decay. According to this study, oil-pulling can potentially prevent the need for some medications or surgeries. We are big fans of that! Who doesn’t want to avoid going under, and with something as simple as swirling oil around in your mouth.

The American Dental Association isn’t exactly enthusiastic about the practice of oil-pulling. They do not believe that this practice can replace regular hygiene practices, and isn’t even effective when supplemented with your current practices. The ADA uses the lack of enough research and peer-reviewed scientific studies as a reason oil-pulling should not be used. They refer to it as a “folk remedy”.

WebMD is more accepting of this practice and believe it is not based on pseudo-science. In the article, several studies are referenced that show oil-pulling can help protect against gingivitis, plaque, and the bacteria that causes bad breath. WebMD also recommends using coconut oil if you do decide to oil-pull. Though it may certainly be beneficial, WebMD claims you should not skip brushing or flossing.

What Do People Think?

Live Coco was brought to our attention by the tiny and fierce Wolf Tyla. This performer has long recommended Live Coco products on her Snapchat.

On the Live Coco website, the oil-pulling kit holds a 5 star rating, based on over 70 reviews. Comments come from customers who claim the oil worked quickly to remove stains and whiten their teeth. The taste is praised as well.

We definitely think so. Besides polishing up those pearly whites, oil-pulling seems to have some other great benefits for overall oral health.

Though you can do so any time during the day, people recommend oil-pulling first thing in the morning.