If you search google for Sweden Bitters, you will see thousands of results, with names like:

Schwedishbitters and most likely many more.

All these names have two words that stand out the most:

Bitters - sharp, pungent taste or smell; not sweet. Liquor that is flavored with the sharp pungent taste of plant extracts and is used as an additive in cocktails or as a medicinal substance to promote appetite or digestion.

This means that all these names, have one thing in common – bitter herbs from Sweden.

All these Sweden Bitters have been developed by different people, herbalists, doctors, hundreds of years ago.

One of the Swedish Bitters stories say that Original Schweden-Bitter has been known for over 430 years, and was first brought to Germany by Swedish troops in the 17 century. The Swedish doctor Urban Hiarne Samst, or as some say Claus Samst who lived to be 104 years of age from 1620 until 1724 and died from a riding accidents, proclaimed in his diary the herbs that are found in Sweden Bitter elixir.

Another very well known person, who’s name is used on many Swedish Bitter packagings these days is Maria Treben.

Maria Treben was no healer, she was a housewife that had a heart for plants. Her guiding principle in life was: "One must help". She dedicated her life to healing herbs and to help the sick until her death in 1991.

In 1946 Maria Treben got ill, and was diagnosed with typhoid fever (Typhoid fever is an infection that causes diarrhea and a rash -- most commonly due to a type of bacteria called Salmonella typhi) when she was in a refugee camp in Bavaria. Her doctor told her that she would be suffering from the disease for several years until eventually she will die from it. Marias sister who saw the suffering of Maria Treben, was helping her to get better with herbs, specifically with Sweden herbs, and after using Swedish Bitter herbs for a short time Maria Treben was healthy. This may have been the trigger for Maria Treben to later work so closely with medicinal herbs. In her remedies Maria was following the teachings of conspicuous Father Kneipp. Marias main knowledge was picked up from these three different sources:

Finally at the age of 64, Maria Treben started to lecture on the topic of healing herbs, and the most famous book by Maria Trebens "Health from the garden of God" appeared in 1980's.

Most Schweden-Bitters have natural bitter taste, and consist of herbs starting from 11 herbs and some have 21 selected herbal and natural ingredients.

The main use of Schweden-Bitter is to stimulate body’s digestive system.

Swedish Bitters that www.wellbeingherbs.com sell, consist of 22 selected herbs, including candies that are all individually packed.

Our Sweden-Bitters is produced and packaged in Germany by Stefan Zwerenz, who’s Schwedenbitter has a long and great reputation all over the world for many many years. 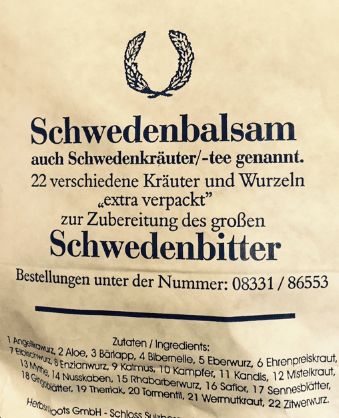 With our Schwedenbitter herbs, from one package you can make approximatelly 1 Litter (34 oz) of Schweden-Bitter, and for ONLY $21.99. Price and quality of out Schwedenbitter is one of the best on the market of USA and Europe.

If you are one of the customers who already tried our Schwedenbitter, we ask you to please leave a Feedback in the form below.